(A technique for Virtual Case Study  of  upstream floodwater detention)

Seven routine steps below explore the potential for ‘DIFFUSE’ catchment flood alleviation by hydraulic analysis of stream networks.  The goal of such case-study is to provide evidence for the optimum number and location of (CaBA) FRM detention measures.  “RAS-Flood“  methodology complements risk-assessment, and is a useful tool for evaluating community action plans.  Essential data and code are free to download. This allows alternative channel features to be tested easily (routinely calibrated against high rainfall).    So . . . . 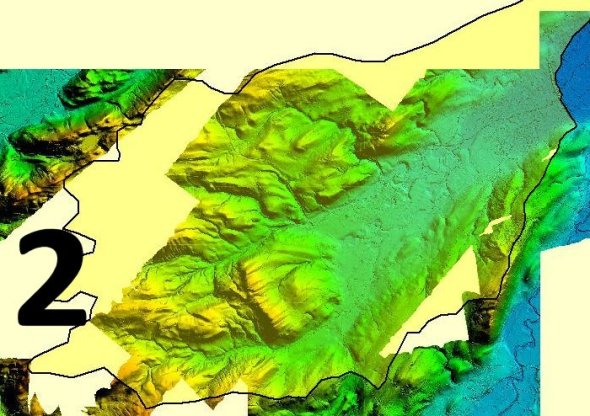 Data step 2:  High resolution relief.  Where necessary, flown lidar data ‘holes’ are filled by underlying radar. Whilst, at present, the interface between radar and lidar elevation data demands some average, disconnects are seldom at critical locations. 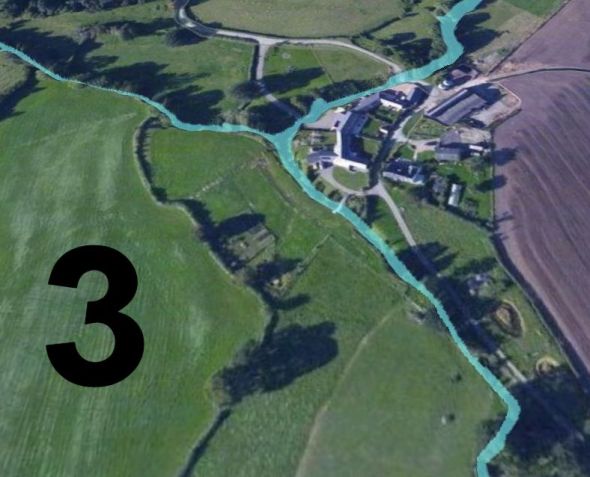 Critical step 3:   Depth and width of the rural stream network are embedded into the lidar/radar point-cloud with  bathymetry  moderated for flow continuity.   (‘Atrepo’ point-smoothing methodology creates a ‘bed-water-surface’ layer – routinely to a 1M grid).

For analysis geometry, vectors are derived from catchment relief

GIS step 4: The relief of the watershed is broken down and layered in respect of drainage areas and flow accumulation. (Generic routine GIS;  Globalmapper being hard to beat !!)

Prior to hydraulic analysis a computational mesh is constructed

Penultimate Intervention Step 6:  In the illustration above red ‘X’s are “FRM-adapted” public footpath crossings, yellow ‘X’s are public road crossings, and purple ‘bricks’ are commended locations for a portfolio of landowner/community adaptation. The ‘no-constraints’ effect of alternative groups of measures can be compared. Mesh overlay initially by extreme roughness (ie within the immediate perimeter of the intervention & rather than by form) – roughness being the easier parameter within RAS analysis code to impose (and manage) stream ‘ponding’.

Hydraulic results Step 7:  By way of example, the above aerial view shows increased ponding (coloured green) upstream of two footbridges adapted for FRM – the blue  perimeter being baseline inundation, ie prior to intervention.  The downstream hydrograph is indicative of the effect of 50 such interventions spread over the 40 sq km study-area. (Beyond this and as a by-product of “RAS-Flood” analysis, imposition of ‘1:200’ extreme rainfall effectively creates an opportunity map of further potential ‘hydraulic’ intervention sites.)

Increasing levels of upstream intervention are thereby tested for impact on the downstream hydrograph.   The most attenuated hydrograph of  the above illustration is indicative of the ‘multi-measure’ effect of ambitious (five measures per km2) course adaptations within the watershed perimeter.  Such adaptation is sometimes described generically as ‘Slow-the-Flow’.  In ‘RAS-Flood’ virtual case-study, watercourses are constrained initially at infrastructure-crossings and other hydraulically optimal locations to boost riparian ‘blue-green’ storage – (this for community benefit, always assuming consent and with overbank ‘ponding’ increased ONLY during extreme rainfall). The calibration event for the flow modelling exercise illustrated on this page is the 25mm Mid-Wales rainfall (from 06.30-07.30 am on 27 May 2018) on a 40 sq km tributary of the River Severn.

“Every catchment can benefit from Virtual Case Study“

Essential “RAS-Flood” components are free to download and implement